Nashcon 2015 was a huge success. I have pulled together some reviews that were written by those who hosted some of the games which took place at this popular war gaming event in Franklin, Tennessee this past weekend. Nashcon 2015 ran according to the schedule.

My father, John Hill, was missed my many who were in attendance.  Gatherings and  parties at the hotel bar as well as a special memorial table and booth were set up to remember their fallen comrade, John Hill.

I had a great time and need to express appreciation to the staff of NASHCON for their tremendous support. Special thanks to Cory Ring from Cigar Box Battles for acting as our on-site person. Thank you. I counted 16 Johnny Con folks there. Three of the Louisiana Guards came up from New Orleans, Kermit brought  Brett a new 14 year old player with him, Dean West and Patrick Lebeau, Mike Wedding, Phil Wells, Cory Ring had 4 players (2 came up from Florida, and Dennis McKinney and I from Indy. Doug Kline set up his booth as BTC and was happy with the results. 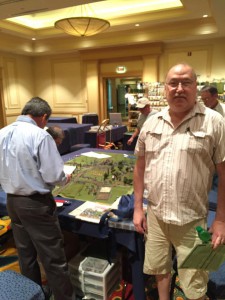 The play kicked off with Mike Wedding running on an unscheduled Antietam game. Mike is a regular moderator for games at Johnny Con and this game was his best one yet. One player indicated it was like a yo-yo with good news shifting from Yank to Rebel several times. Would recommend this one for future play. Union won.

Cory Ring hosted a JRII game on Chickamauga on one of his Battle Mats. Mats look excellent since I do not believe you can buy the in/our door carpeting any more. Very impressive set up. Artillery man Kermit ran out of ammo, just a sidelight. Confederates won.

Patrick Lebeau ran his ADF Battle of Eutaw Springs from the AWI. Proves that ADF is also good for smaller battles. Terrain was tremendous. If they gave a reward for this category, Patrick would have won. Just as a sidelight, my side won and America remains with the King. So far. 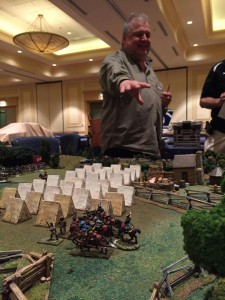 Patrick explaining his AWI version of ADF. The battle of Eutaw Springs

Saturday kickoff was Dean’s Battle of Champion’s Hill for ADF. This was a 2 session game and took every bit of the time. Am appreciating ADF more with each playing.  Terrain, as usual with a Dean West game, was superb. I am pleased to report that my Division under the command of Peter Osterhaus secured one of the victory locations without suffering a single loss. However, the battle fell to the Confederates because there was no way in the time remaining to get that doggone bridge in the Rebel rear. Had a lot of fun. And our young man Brett won two of the ADF books compliments of Osprey. There were two nominees, one from the North and one from the South. Since the books were not the basic rule books but one basic and one scenario book, it was decided to make it a winner take all dice-down between the nominees. Brett won with this great wargamer solution. 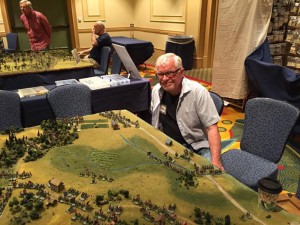 Saturday evening Patrick ran his AWI game again and I regret that me and my old body and aching back retired to the comfort of my bed.

Nothing on Sunday this time but spent about two hours thanking folks on site for their excellent support. This is a great convention and well worth attending.  More information to follow for next year.

Friday night about 8:30 to 10:00, 14 of us gathered in a portion of the bar to share memories of our great friend, John Hill. Dean had John’s light blue vest and we assigned it to the head of the table. I had set up in the gaming area a display of John’s board games that I had and had my laptop set up with John’s picture from last year’s NASHCON (thanks to Steph Hill for OKing the use from her Dad’s Tribute site) and used that at our session to represent him right in front of his vest. Comments flowed from us about our friendship with John and how he will be missed. And he will be missed.

I am sure that Mike will be posting pictures and more can be found at the Cigar Box Battle site.

Good time was had by all.

I agree with Norris that NASHCON was a blast, and I believe that this year’s consolidation of NASHCON/JOHNNY CON had a positive affect on both cons. I believe that this newly created bond should be continued indefinitely. JOHNNY CON has always been a small event, specifically dedicated to the Johnny Reb suite of games, by which I mean JR, JRII, JRIII, Across a Deadly Field, Yankee Doodle and The Final Argument of Kings. NASHCON in its turn, has always included a strong ACW presence which includes numerous JR games. Cory Ring, an important member of the NASHCON organizing team, is a long time Johnny Reb enthusiast, and also became a valued member of the Across a Deadly Field design team.  Moreover, Cory’s popular blog spot, Cigar Box Battle, consistently supports Johnny Reb gaming, and has been instrumental in spreading the word about John Hill’s final, and possibly his best, ACW game design (ADF).  For our part, Patrick, Kermit, Norris, myself, and now Michael Wedding  have done our very best to reciprocate by promoting NASHCON, and by presenting high quality games there over the past two years. Also, this year long time friend Doug Kline, owner of the rights to Johnny Reb III, supported NASHCON by bringing his Battlefield Terrain Concepts products to sell at the convention. BTC is a popular east coast vendor of terrain products and model buildings.  It seems to me that this synergistic relationship should be strengthened further forming an even closer bond between NASHCON by making Johnny Con a permanent part of NASHCON.

Best Regards to all
Dean West

I hope that everybody that attended Nashcon / Johnny Con 5.5 had a great time….I know I did! We JR gamers are a small, and spirited group, and we made at huge impact at Nashcon with some really great looking and well run games! Many, many compliments were passed on to me after the show!  I’d like to thank all of you that flew in or made the long drive! We had The LA Guard fly in (great meeting you!), guys driving down from Michigan (Patrick and Michael), Indiana (Norris and Kermit) and “The Old Guard” from Tallahassee, FL! There were many more of course!  Thanks for marching to the sound of the guns!  A special thanks goes out to Doug Kline at BTC for bringing his show on the road to us, and selling all kinds of goodies! Thank you, and I hope that you will return next year!  It’s always fun to game and talk with the JR guys! What a great bunch of guys to discuss the ACW with, roll dice with, and perhaps share a cold beverage or two. Pure gentlemen and quality gamers all around. 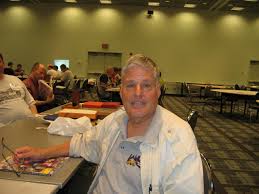 We had a memorial tribute and toast to John Hill on Friday night. I was only able to attend the first part, but it was great hearing Norris and Dean (two of John’s longest friends) discuss John’s legacy as a gamer, rule designer and all around great guy.

As far as the JR games: Michael ran his JR3 Antietam “Corn Field” game on Friday morning, and it was a great looking game that the guys just couldn’t stop playing! Dean ran his ADF “Champion Hill” game all day Saturday, and it was a masterpiece! Patrick ran his great looking 28mm AWI “Battle of Eutaw Springs” a few times during the con. I ran a 28mm JR2 game on Friday afternoon, and I think that everybody had a good time. There are a few pictures of the games on the Cigar Box Battle Facebook page. We are always looking for more JR games, so if you’d like to run a game next year, let me know!  We are looking at bringing “Johnny Con” back to Nashcon next year! Stay tuned for more info!