Across A Deadly Field: A Legacy to John Hill > Squad Leader 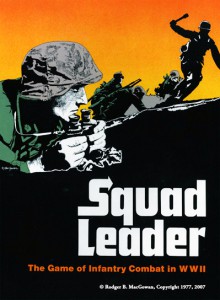 Hall of Fame Game Designer John Hill designed Squad Leader, one of the most complex and thrilling wargames of its time. It is virtually unique among World War II board games focusing on infantry combat in Europe. Squad Leader is the absolute natural extension of the trends toward realism. All of the pieces of Squad leader represent the regular squads rated for firepower, range and morale as well as weapon and vehicle crews and elite squads with high firepower and morale.

Squad Leader was produced in time to debut at the 1977 Origins Game Fair, an annual gaming convention that was first held in 1975 and is run by Game Manufacturer’s Association. The original print run of 2,500 copies of Squad Leader had a purple trim to them and have become a prize collector’s item.

Below are some Squad Leader rules and scenarios that are free to download in PDF. If you experience problems downloading the following documents, send an email to stephaniehill@acrossadeadlyfield.com and I will email it to you.