Across A Deadly Field: A Legacy to John Hill > Blog > About John Hill > Epilogue of Johnny Reb III

A letter below written by my father, John Hill, in 1996 in regards to being asked the ancient old question, “What was it really like fighting in the Civil War?” How did those soldiers really feel about the war?”  The below letter was published in the Johnny Reb III rulebook on page 63.   For more information about the Johnny Reb III wargame design and reference charts, click here.

Unfortunately, I don’t know. Despite 30 years of study and almost 10 of civil war Reenacting I feel that my understanding of the civil war battlefield will always incomplete.  The more I learn the more I realize how little I know.  I have read hundreds or reports and first hand accounts, participated in large reenactments, and have been heard the rattle of a thousand muskets and the roar of massed guns.  But, I know not the actual battle.  I have not been forced to march 26 miles and plunge into a desperate battle as did A. P. Hill at Antietam.  I have not experienced battle, but I believe that it has to be one of the most confusing and horrible experiences known to man.   And Civil War, in terms of carnage per unit area and time, was one of the worst.

In an attempt to decide what it was like, I have been forced to rely on the writings of men who were there and may own experiences as a re-enactor.  Both are useful viewpoints and offer insights not offered by the other.  However, both are also limited.  Very few civil war participants were able to present an objective retelling of what they saw, what they did , and why they did it.  Immediate regimental, brigade, or division reports were often shaped to insure what they did, and why they did it, were seen in the most favorable light possible.  Postwar memoirs while exceptionally useful were often written to prove a point or vindicate an action.  But by studying these records and in participating in many battle reenactments, I have begun to discern a pattern, and that pattern was that there was no pattern.

Battle, was the ultimate stress situation.  The noise alone often made conversation between adjacent men exceptionally difficult.  Maps were often worthless and visibility could be random and prone to constant change.  Rosecrans, in attempting to direct the Battle of Chickamauga, had difficulty locating his own army, let alone that of the enemy.  Even down at the regimental level, the simple problem of positioning yourself to effectively face the enemy was no small task.  AT Wilson’s Creek, for instance, one Union regiment became so confused that its actually formed and dressed on a Confederate regiment.  When I fought in the Wilderness reenactment, as a private in the 19th VA, the tree canopy trapped the musket smoke and visibility dropped to no more than twenty yards – less than inch of Johnny Reb terrain.  In such an environment, I am lead to believe that an atmosphere of swift change and constant crises was the defining element of the civil war battlefield, and in reality, most of the participants may have had very little control over what has happening.  Often, once the armies were engaged, the higher the level of command, the less control you had.  You could be left – as was Grant at the Wilderness — with little to do except whittle.

So, in many respects, this game [Johnny Reb] despite its wealth of detail and ten years of evolution cannot even begin to simulate the sweeping maelstron of a civil war battle.  It is, at best, a pale reflection of the actual event. 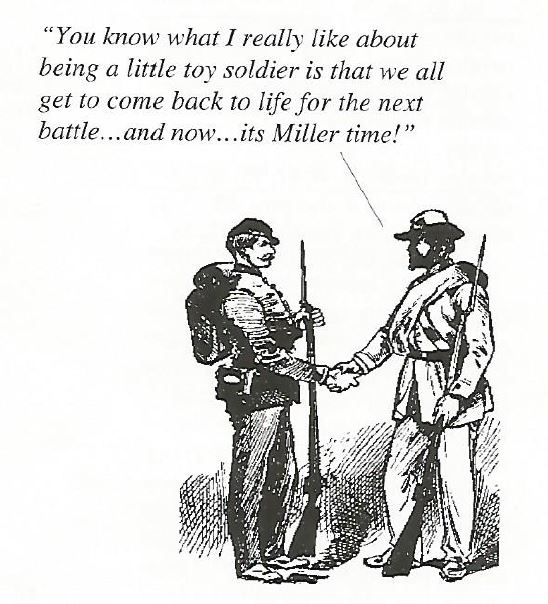