Across A Deadly Field: A Legacy to John Hill > Blog > Squad Leader > History of Tactical Games: Evolution of Squad Leader 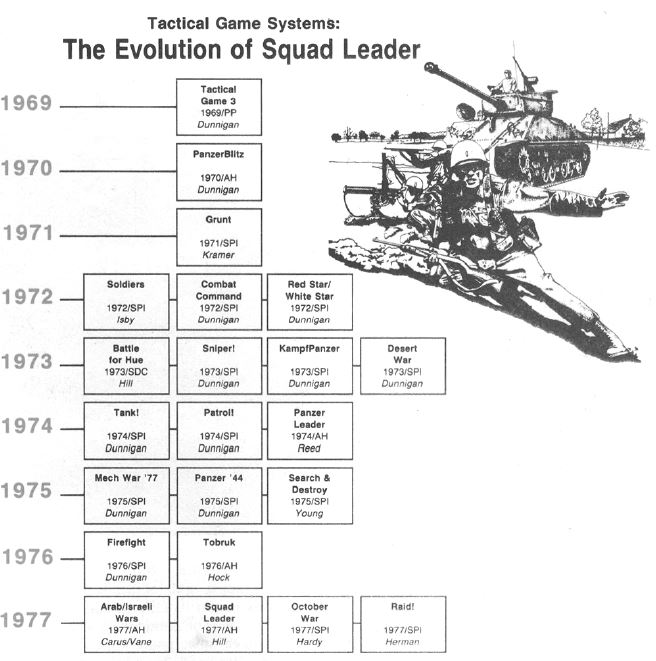 In the Wargaming World, the following happened that same year…..

Some of the game titles listed in the ten new games ad were Barbarossa, Normandy, Leipzig and another game which was simply titled Tactical Games 3.  The ad copy of that issue of Strategy & Tactics described Tactical Games 3 as:

“A new departure in games. A platoon/company level game whose main objective was to compare different weapons/tactical systems. This version deals with the situation on the Russian front in 1944. Counters include T34c, T34/85, JSII, Su85, PzIV, PzV, PzVIb, and many other armored fighting vehicles as well as infantry, mortar, artillery and other types of weapons. A radical new approach to historical gaming. The first to be published of a series of similar games… $5.00.”

Tactical Games 3 was reported as being a “new departure” due to the fact it touched on areas that had never been attempted before.  The games prior to Tactical Games 3, designed by James Dunnigan, were based on a strategic/operational level.  Tactical Games 3 opened the doors to a new genre of games as well as a new methodology for playing and designing wargames.  These new methodologies included realistic terrain considerations,  line-of-sight and proper tactics, and a type of “plug-in” multiple scenario format.

In 1976, Fire & Movement Magazine was founded.  James Dunnigan was interviewed for the July 1976 issue of Fire & Movement.  Dunnigan was asked about any recent rumors regarding the wargame hobby industry and he said John Hill had been approached by Avalon Hill to design a wargame like Tank!, but instead a squad level game.  My father, John Hill, was the most respected admired independent game designer.  John Hill had a reputation of being the head designer of Conflict magazine and was also the president and founder of Conflict Games Company.  My father was until the day he passed away an important figure in the game’s public eye.   During the interview with Dunnigan, it was noted that one of John Hill’s earlier games, The Battle of Hue, a tactical game, was very popular and showed promise of paving the way to designing a squad level game similar to Tank!

One year later in 1977, John Hill’s design for Avalon Hill was released as Squad Leader: The Game of Infantry Combat in WWII.  In November 1977, Fire & Movement Magazine featured Squad Leader detailing a full report.  The rest, as they say, is warame history.

Thank you for reading this article on the history of tactical games and the evolution of Squad Leader.