Across A Deadly Field: A Legacy to John Hill > Blog > About John Hill > Duke Seifried Says Goodbye to John 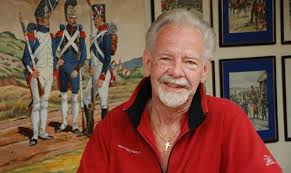 I have lost a great dear friend.     We shared many moments of warm camaraderie not only over a game table but in our personal lives.    John was a tremendous creative force.    His accomplishments are considerable:   from seminal board games like Bar Lev and Squad Leader,  original miniature tin soldier games like Johnny Reb and his recently published by Osprey “Across a Deadly Field “and his many, many historical presentations.    He appears in the Hall of Fame and in my  inmost treasured memories.

We go back a long way.   I remember  being “executed” as a Confederate spy  on  visit to:   Where in the Hell is West Lafayette?   Well, that’s what the Tee-shirt said.    He administered the final pistol coup-de-gras as the Union officer.   (We did not share the same alliances regarding the ACW).   John and Lou had a Hobby and Train store there at that time.

Then,  I remember being awakened  very early one morning and driving some distance to be let out in a fog  (just like Brigadoon).   We walked into the woods following some unusual voices in the distance.   We walked into an Indian encampment with squaws and braves and even little papooses where the women tended the blazing fires cooking Indian cornbread.    No one noticed us – I found out later that if you were not in “costume” you weren’t there. We moved through the Indians and on into a British camp and later into an American camp.   We had passed through the veil and were back in the past.   We were mystically returned to the time of the French and Indian Wars and this was none other than “The Feast of the Hunters’ Moon”.   To say I was impressed was mild – more like dazzled,  as I was just starting to develop my “Tomahawk” miniatures game.   John was aware of this and provided me with an example that could not be equaled anywhere anytime!   That was a perfect example of John’s imagination and creativity.

John put on some of the best American Civil Wars games of all time.   His set-up at countless shows was crowded and active with aficionados in great numbers.     But the ACW was not his only credit for putting on a game.   The BEST game weekend I ever experienced was when John came to Dallas and we played two WWII adventure games I shall never forget!      John was a game master without equal.

On Friday I was cast as a German officer leading “The Peptic Ulcer Brigade” (with typical Teutonic thoroughness the Germans put all who suffered from this ailment in the same unit to improve dispersal of the medicines).      As we entered the mostly bombed-out town a wounded German reached up from beside the road with some papers in his hand.   I passed him by and ordered that someone see to his being taken to our medical center when it was set up.   What a mistake, for I later found out the “papers” were the key to the explosives he and his men had set up in the town.   Soon all the Americans in the world descended upon us – we didn’t have a chance.   If only I had taken the trouble to determine what the wounded man was offering… Saturday we played a game about Oglethorpe, a German Peenemunde scientist who wanted to surrender to the Americans.   My job as an SS operative was to find him and instruct him as to his loyalty to the Third Reich – whatever that required.    Many well-known gamers participated in this massive operation that included Patton’s tankers, the Marqui, loyal Heer soldiers and “enterprising” Americans of dubious motivation (think paint rounds).   John had us interrogating one another and it was a cliff hanger up to the very end when Oglethorpe was rescued from my clutches by the Americans at the conclusion.   What an imagination!    John could create scenarios that were classics!

Through the years we each suffered from a number of difficult personal moments.    We shared these private times with encouragement, suggestions and tears.   In the final analysis, John loved his family above all.  Lu has been his anchor providing the stabilizing hand through their life together.   I admire her greatly for her patience and love for John through thick and thin.  John and Lou have given the fullest measure of interest and love for their daughter Stephanie and her children.

Let me present a reference to “Chewy” the squirrel (adopted by John and Lu) and his adventures.   Close to the ground by the front entry was a metal dispenser cup for “offerings” of nuts the Hills regularly provided to Chewy.    We would spot Chewy on walks around the delightful lake where they lived at that time.    He would jump from tree to tree and of times keep up with us as John would have some treats available.    Apparently that was not enough because on one fine afternoon they discovered Chewy had broken through the screen on the very top floor where the kitchen table with a bowl of nuts sat prominently in the center.  Chewy was in the bowl assimilating the nuts as quickly as possible.    He must have been embarrassed because when they entered the room he quickly made himself scarce by leaving where he had entered.   He observed the proceedings from the safety of the tree limb outside the window.

Have I mentioned what a good cook was Mr. Hill?    Sea bass that was offered in several manifestations was the highlight of that visit!

Now I must tell you of John’s immortal words that have been an inspiration to me in all my historical and gaming pursuits.   There are two of them and they are unique to his take on the world:

FLAVOR – the feel of the times, the appearance of the people and the things we most associate with any given subject period.

BUNGLE– the ineptitude we all express (to our embarrassment) as we try to do the best that we can under the circumstances.

I have applied these factors to almost everything I have made or composed.    I thank John for those words.

You will observe that I have described a Renaissance man:   A person with many talents and abilities;  a personality given to interesting and sometimes quirky nuances,  an ultimate researcher,  a gifted designer,  a creative writer and a  friend whom I shall miss very much.     Today is a lonely day – I find I can’t keep my eyes from watering.